If those who do not remember history are doomed to repeat it, those who conveniently forget recent history are just digging their own graves.

Just to be clear, we’re not talking about the troubling parallel between Trump’s executive order banning refugees and visa applicants from seven Muslim-majority countries and the U.S.’s reluctance to admit Jewish refugees during the Holocaust, although it applies there too. At least, not directly. No, those forgetting recent history are congressional Republicans. Fresh off their recent electoral success, they seem to think the rise of the Tea Party eight years ago was a one-off event, rather than a portent of what is to come in an age of political polarization. 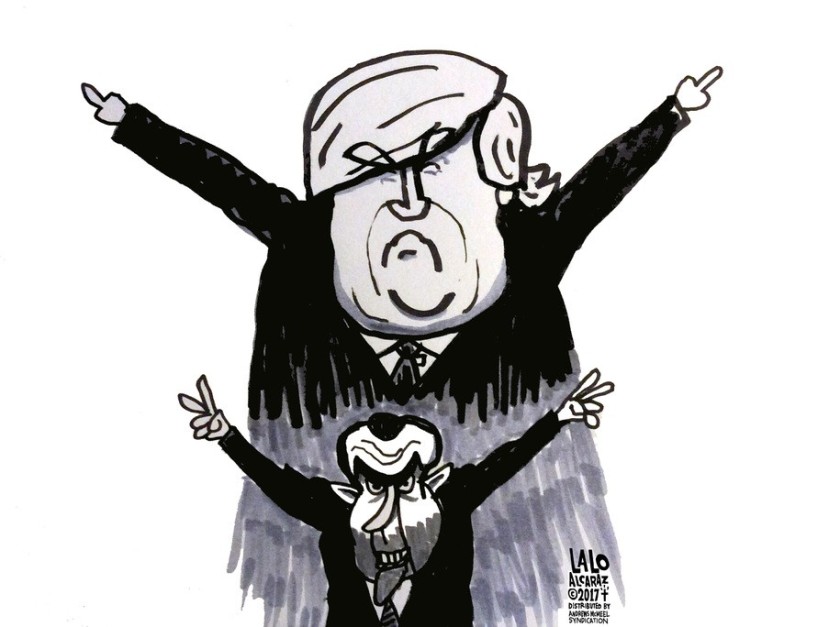 The emergence this week of a script for an Islamophobic film written a decade ago by Steve Bannon, Donald Trump’s chief strategist has drawn new attention to Bannon’s past statements about Islam, and to his view that “the Judeo-Christian west” is engaged in a “global war” against “jihadist Islamic fascism”.

The Trump spokeswoman recently blamed refugees for a fictitious massacre in Bowling Green.

…Pence was not offered as an option to CNN — which has been the subject of intense criticism from the president and his defenders — but senior adviser Conway was suggested only to have the network decline the offer.

Earlier in the week it was reported that the White House was boycotting CNN because the administration feels the network has not been fair to them, reportedly saying, “We’re sending surrogates to places where we think it makes sense to promote our agenda.”

This is Donald Trump’s America: one where things like art and books and science and learning and thoughtful consideration of complicated problems are deemed worthless and tossed aside.

Looking back over the course of the past two thousand years, it is remarkable how many of these violent and discriminatory measures were about profit and patriotism.

In the wake of the Trump administration’s changes to immigration regulations, many people are wondering if this is the beginning of religious censorship in the United States. Certainly it wouldn’t be the first time a government implemented a ban on members of a religious group it viewed dangerous or subversive. But religious bans never work out for anyone: either those being targeted or the governments sending others into exile.

Senior White House policy adviser Steve Bannon’s characterization of traditional news outlets as “the opposition party” and his demand that the media “keep its mouth shut up” reflects a sensibility similar to those of Turkey’s president, Recep Tayyip Erdogan, and Egypt’s military ruler in a civilian suit, Abdel Fattah al-Sisi. While it’s true that Trump, unlike those two strongmen, has not thrown reporters in prison, the administration’s concerted effort to delegitimize respected media outlets so that it will be freer to construct and reinforce its own narratives is right out of the authoritarian playbook.

In his first week in office, Donald Trump signed an executive order threatening the funding of any municipality deemed a “sanctuary city,” an umbrella term for any local government that prioritizes enforcing local criminal law over using its resources to enforce federal immigration law.

Sen. Blumenthal: We will use every tool to block nomination

Senator Richard Blumenthal, D-CT, talks to Joy Reid about Donald Trump’s nomination of Neil Gorsuch for the open Supreme Court seat and how the Democrats are working to block his nomination.
Read at MSNBC